Are you Interested in the History of New Malden, Old Malden, Coombe and the Surrounding Area? 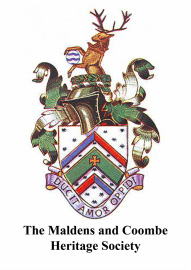 The area known as the Maldens And Coombe covers four distinct districts. These are in order of age,

Both Malden and Coombe appear in the Domesday Book (1086) (as Meldone and Cumbe), but their history dates back earlier. Kingston Vale, previously known as Kingston Bottom, dates back to at least 1791, whilst New Malden came into existence in 1850.

In June 1935 the Urban District applied for a Royal Charter of Incorporation as a borough, and received the document in September 1936 from the Lord Mayor Of London.

The borough was abolished in 1965 as a result of the London Government Act 1963 and the area became part of the Royal Borough Of Kingston Upon Thames on 1st April 1965.

The Maldens & Coombe Heritage Society (MACHS), a non-funded body comprised of volunteers, was formed in 2012 to research the local history of the area. It catalogues and archives documents, photographs, and records resident's recollections of events which happened in and around New Malden particularly during 'the blitz' in World War II. Buildings of significant historical interest are documented, especially those of town merit, such as the original town hall which Waitrose now resides in. The facade remains as it once was.